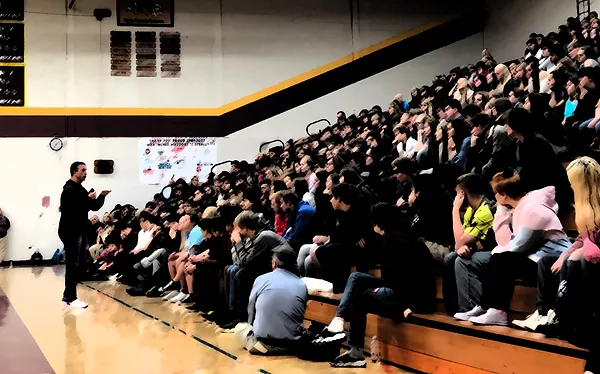 MARINETTE, WI – Chris Herren, a former NBA player who rebounded from drug addiction spoke to the student body at Menominee High School on Thursday, October 4th. Many Menominee High School students were brought to tears as Chris spoke about his own history with addiction which eventually cost him his basketball career. His visit was sponsored by Winsert, Inc.

Herren was a basketball legend around his hometown of Fall River, Massachusetts. The McDonald’s All-American was courted by several top colleges and received numerous honors. No one knew his big secret. “That day, at 18 years old, I opened a door that could not be closed for another 15 years,” he said. He went on to tell students that before every assembly he prays that he can help at least one student. “the students that have come to me over the years, telling me that I have helped them mean more to me than anything that I had ever accomplished as a basketball player.”

“My goal is that one student in this gym will return to class and sit at his or her desk and say ‘I don’t like the kid I am becoming. I don’t like the things I am doing. I feel bad for my parents. I need to do better,'” he said.

He went on to tell the students that his story is not enough, “this is your story.”

To learn more about Chris Herren’s story, we encourage you to visit The Herren Project at theherrenproject.org.